Denver recently held its 2018 primary election, and the Elections Division has provided helpful data on the trends of mail-in ballots. Starting with around 380,000 ballots issued on June 8th, Denver has accepted 143,725 ballots that voters have submitted in the election period ending June 26th. Even though voters had the option to vote in person during the two-week election period, less than 2% (2,836) of total votes were cast in person.
Of the votes cast by mail, most were accepted on the two last days of the primary, June 26th (14%) and June 25th (4.6%). The day with the next highest return rate was the first day ballots were counted, June 11th (3.2%). Votes received a small bump on each Monday (around 1%-1.5% for each group) likely due to ballots not being counted on Sundays. The graph below shows the ballots returned in proportion to the total ballots sent.

Comparing returns of registered Democrats and Republicans and unaffiliated voters, the majority of ballots returned by each group also falls on June 26th and June 25th. A slight exception exists for the first day of counting where unaffiliated voters returned ballots at a lower rate than party-registered voters. The graph below compares the returns of each group in proportion to the ballots sent to each group. 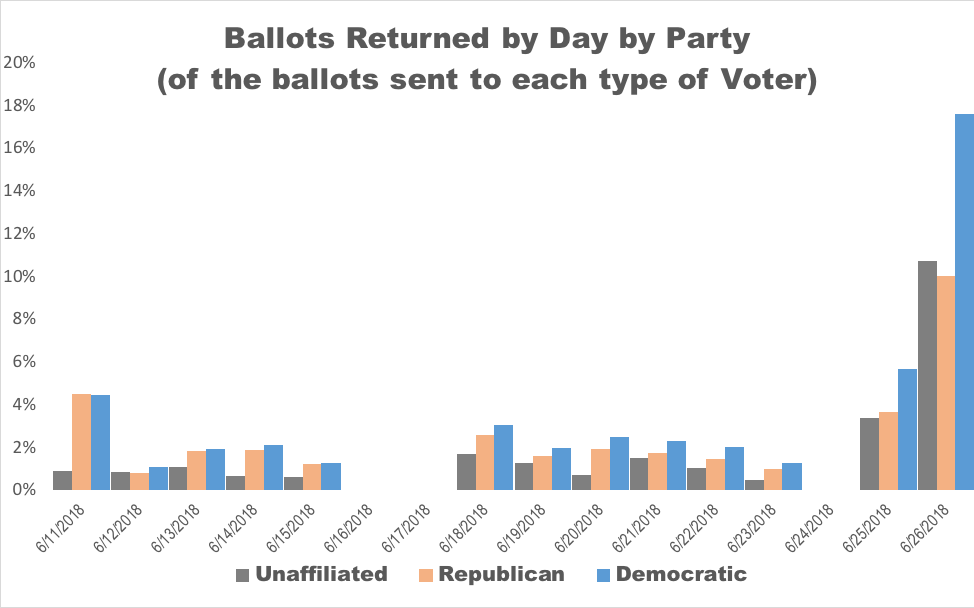